If you are a human living on earth, chances are you have a social media account. Whether it be facebook, twitter, pinterest or any of the hundreds of options available, people are “connecting” through this digital medium.

Therefore, with so much “connecting” going on we should all be very happy and loneliness should be on its way to extinction, right?..

Unfortunately, this is not the case.

The data has come in and it appears our social ills have only been increased due to compulsive internet use, including social media. An article from the CyberPsychology & Behaviour magazine by PhD psychologists Kim, LaRose and Peng showed that those turning to the internet to fill a social and emtional void were only further disconnected from true human relationship.

For many of us who were born in the early 80’s or earlier, a world without social media is easy to imagine. A time when contact was real and organic. In contrast, modern concepts of human connectedness are — for the first time in human history — composed almost as much by digital “relationships” as they are by real human contact.

Combine this trend with the affordable nature of mobile devices and the near omnipresence of Wi Fi connections and you can see how we have been transformed into homo sapien digitalis. When I go to the grocery store or to the bank, I hardly ever see anyone stuck in line that will turn and start conversing. They used to. Nowadays, most everyone is looking down at a mobile device if they are at a bus stop, in a line up or even at the park while their kids are playing. I’ve even seen a couple at a restaurant texting away and ignoring each other!

After more than a decade of heavy social media use, it appears that we’ve come full circle and must realize that there is no replacing true human contact. The superficial nature of online relationships are millions of miles removed from the real touch of actual human social connection. Soul to soul. Not IP address to IP address. 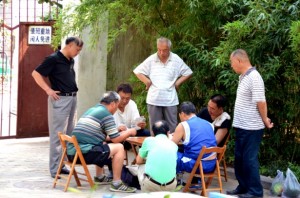 Third world countries who live with much less technology have lower rates of anxiety and depression. Although there are many reasons for this statistics, one thing is certain: they are forced to live more authentically then most Westerners because they deal with people all day, not avatars and internet trolls. The average third world resident’s day includes human contact that is comprised of actual human relationship and has nearly zero time spent in cyber-relationships.

I’m not advocated the annihilation of social media, but a much more restricted use of it.

A University of Waterloo self-administered test can be used to evaluate whether or not your are spending too much time “connecting” through your computer or mobile device. Although determining this will be more of an art than a science.

Perhaps another way to gauge your social media usage is to ask yourself how many of your social media usage is for business or for pleasure. It is inevitable to be hooked into online business connections. It is the new phone book. But it may be unhealthy to use it too much for personal emotional voids. I’ve recently asked myself how many of my “friends” on social media would actually take time to help me physically if I had an urgent need such as moving or renovating my house hold. The list is probably MUCH smaller than the hundreds of names on my facebook friends’ list. Just food for thought.

Sitting down at dinner and talking to your loved ones, reading books instead of status updates and playing with your children, friends and family is the only true “social media” and it has been practiced happily for thousands of years. Perhaps its time to lean a little away from the internet and back into reality…